My previous demo reel is still available for public viewing... 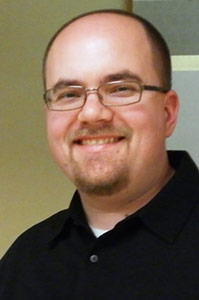 Born and raised in southern California, I grew up fascinated by movies that are able to entertain by making the impossible seem plausible. The work of filmmakers including Alfred Hitchcock, Walt Disney, Jim Henson, Steven Spielberg, James Cameron, and Robert Zemeckis have always inspired me to create. Finding outlets through hobbies of illustration, writing, music, and even occasional woodworking, I’ve been most intrigued by the power of the computer as a tool for visual storytelling.

I got my start in computer graphics in the early 90s, helping my family’s company produce custom fonts and logos for newspapers. Before long, this experience with digital image manipulation merged with my passion for the cinema, and led to my enrollment in the Multimedia program at California Lutheran University. Studying under a former Disney Imagineer, I evolved my class assignments into real-world professional projects, connecting with producers at NBC-Universal and development teams at Adobe, JVC, and Microsoft.

I’ve been working in entertainment for over 17 years since, with Artist, Lead, and Supervisor positions at some of the most prolific studios in Los Angeles. The bulk of my career has been as a VFX Compositor for television and fast-turnaround film projects, often mixed with team leadership, project coordination, and pipeline development responsibilities. I’ve also spent a full TV season on set as a VFX Assistant, and have enjoyed opportunities to design film titles and motion graphics sequences.

While I’m of course well-experienced with integrating CG passes and pulling keys, I tend to specialize in the types of compositing tasks that are a little more puzzling. Often they’re the unanticipated shots that come out of editorial: complicated speed ramps and paint-outs, rebuilding shots from camera projections, blending multiple takes, or just simply massive shots or sequences that push the limits of the time and resources available. I’ve also succeeded in many look development opportunities, working closely with directors and supervisors to research and visualize important story points that become regular themes throughout a series.

Following my Emmy nomination for “Ghost Whisperer” in 2009, I remained an active member in the Television Academy. I’ve also occasionally contributed as a writer for Post Magazine with hardware and software reviews, and provided live coverage of events including the Visual Effects Society Awards, VES Production Summit, and SIGGRAPH.

When I’m not working (or under social distancing orders), I still find myself exploring other “multimedia” experiences of the world, whether it’s a visit to a theme park, a new restaurant, or just in the backyard with friends and family.